A developmental journey into Unreal Engine

Last year I was announced as one of the awardees of the inaugural Epic Megagrants Fund. This grant would go towards the development of a new arts installation continuing on themes I explored with Simple Misunderstanding. My plans were to exhibit an early version of the installation this month with the aim of a festival exhibit during the summer. While there won’t be an opportunity to fully realise my installation this year I will be using this time to continuing working on my ideas in Unreal Engine and sharing my progress through the form of a developmental blog.

Over the next few months I will be sharing my creative process with the engine from the perspective of a Deaf artist. I’ll be exploring different themes and starting points to develop concepts using Unreal Engine as my tool. Ultimately, my final installation will be informed by this journey along with any skills I gain throughout.

The first theme I have chosen to explore is “isolation”. This theme feels very appropriate in the current context but also one I identify with as a Deaf individual. Coincidentally, last week was Mental Health Awareness Week and many people in the Deaf community have used this time to share their own stories, including ones that involve isolation.

In my sketches I’ve written down words that reflect my feelings on isolation, drawings that simulate these and some draft ideas on how Unreal Engine can be used to convey these feelings. 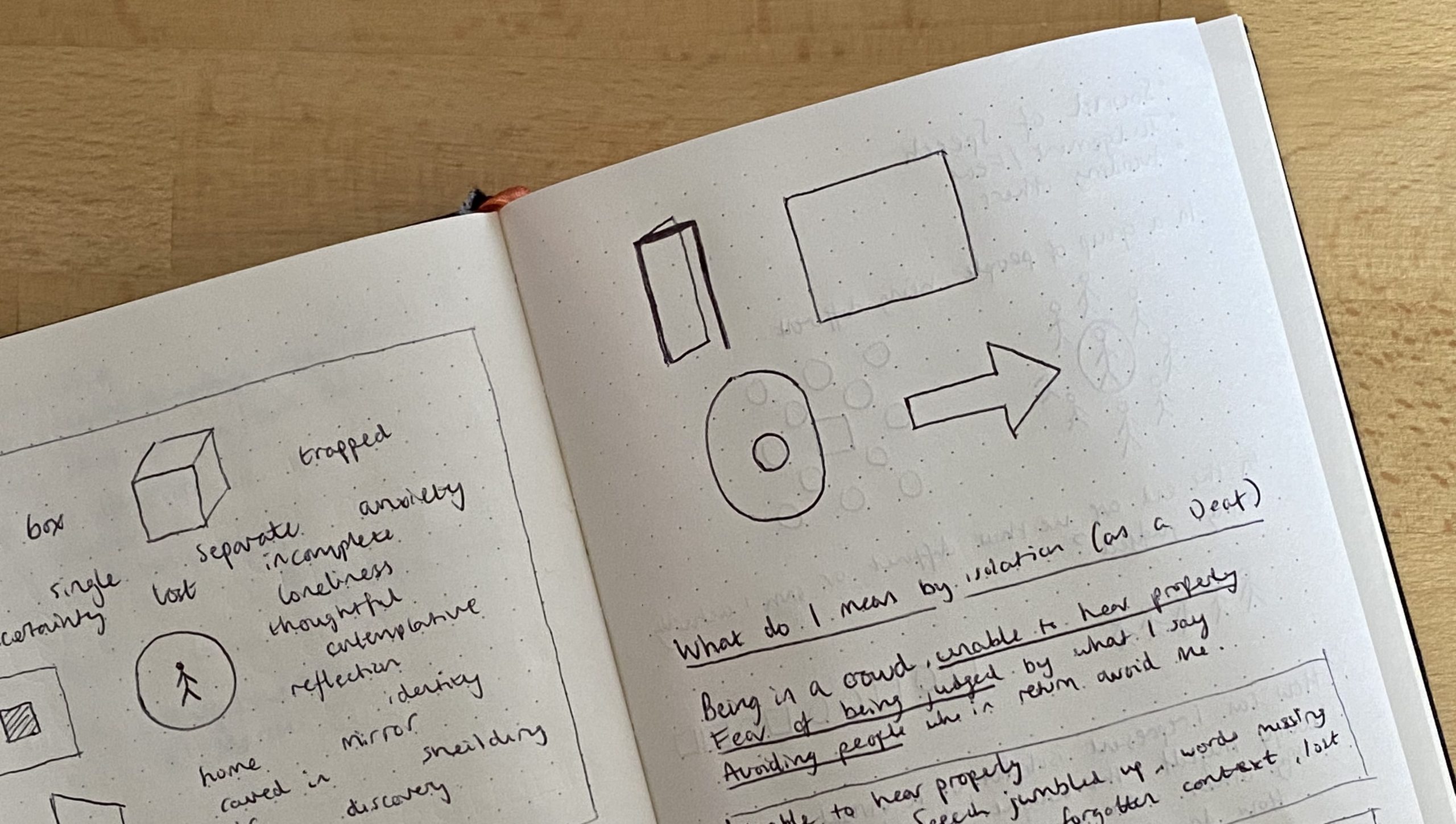 There are times where I’ve felt isolated, I’ve always struggled in a noisy networking-like environment where you have to talk to people. It’s the anxiety of wondering what to say and how to respond if you can’t hear the other person as well as the isolation that comes from it when you choose not to talk to anyone and no one approaches you (they may also be anxious as they don’t know how to approach a Deaf person). I focused on this particular example as the internal thoughts and external environment juxtapose one another. Internally I feel isolated and alone. Externally I am surrounded by a lot of people.

Taking this concept further I came up with an idea how I could use Unreal Engine to create an interactive digital piece based on the concept of boids. Each object represents a person with one of these objects representing myself. In silence, the boids are neutral and mix together like particles. When sound is included, which is incoherent and distorted, the objects avoid the single object that is representing myself, showing the feeling of avoidance that I would in a similar scenario. There is a similar concept in the interactive animation Kids by Playables which has a scene involving a crowd of people who avoid you, the playable character.

In the next post I will be covering the aesthetic style for this interactive visual in Unreal and my process for creating it using Blueprints.

This site uses Akismet to reduce spam. Learn how your comment data is processed.